One of the most frequently asked questions is, "does it have a supercharger?" Of course, for 1957 and 1958, the answer is yes. Those models were equipped with Studebaker's venerable 289 CID V-8 which included the McCulloch supercharger. The 1956 Golden Hawk with the 352 CID Packard V-8 did not come from the factory with a supercharger. 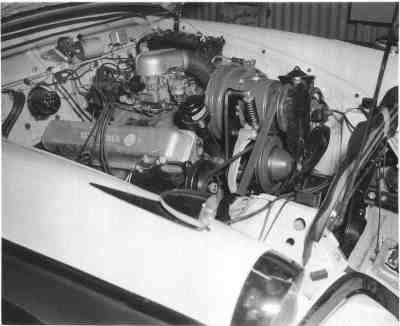 A supercharger was available from  McCulloch for the 1956 Golden Hawk with the Packard V-8.  The photo at the left was submitted by member Brent Hagen of Portland, Oregon. With the fan shroud removed, the photo offers a good view of the installation. This car appears to be one of the rare manual transmission with overdrive units with power steering. You can see the overdrive relay located on the cowl, to the right of the windshield wiper motor. The power steering reservoir and pulley are on the right side just beyond the fan blade and peeking over the top of the supercharger pulley..

It appears that the oil filler tube is slanted to the side and the oil filter canister, if present, is not visible at all. The oil bath is gone, but the carburetor appears to be the standard Carter WCFB 4 barrel. There appears to be a different arrangement for the water pump manifold (you can see the outline on the front of the cylinder head) and the generator adjustment arm. Everything else appears to be pretty much standard.

According to a price list that Brent sent, the supercharger kit for the 1956 Golden Hawk cost $318.75. The distributor for Oregon and Washington was Jim Flanagan's Automotive, Sales and Installation - McCulloch Superchargers, 1802 S. E. 7th Avenue, Portland 14, Oregon.

According to the McCulloch literature, the supercharger caused a 40% boost, kicking the 352 CID Packard V-8 from 275 hp to an astounding 385 hp. All this in a car that was already rated 2nd, only to the Chrysler 300-B,  in horsepower per pound ratio for all cars in 1956 in stock form.

A couple of extracts from the McCulloch Tips series of adverts, which I'd guess were prepared up to a month before publication.
August 1956
Here is one for Studebaker Golden Hawk fans! We’ve just completed development of our supercharger kit for this car and the results are certainly worthwhile! As this goes to press, we haven’t had time to find space enough to really let this baby run! But I can tell you that this is one of the most responsive engines we have supercharged and the blower fits in like a glove – power steering, power brakes and all. Hope this satisfies all of you who have been writing to ask when a McCulloch kit would be available. It’s ready now, so send in your orders!
September 1956
Last month I told you about our McCulloch supercharger kit for the Golden Hawk. Well the car got up to 145 mph (speedo) and still had some pedal left. We also got a 0-100 mph time of 16 sec flat which compares with the stock time of 22.6 sec.